Dreams, memories, and the sea

The first memory I have of my dad is from the age of three. I really wanted to go to my imaginary best friend’s party, and he wouldn’t allow it. What reasonable father would? But being the strong-headed people we both were, I continued insisting, and so he opened the front door for me and told me to go if I wanted. So, I did, but you can only imagine how far a three-year-old could get. The answer is: not very far, particularly when you still can’t cross the street alone.

But my most vivid memory was riding with him in his gray Toyota truck, when I was about five. He offered to stop and get me candy on our way home. Mom had said no before we left, but he got it for me anyway (sorry Mom). And so began our relationship—at least from the Moment I can remember.

It changed over time, as all relationships do—especially with our parents. But until I became a teenager, my Aerospace Engineer Dad was the source of a lot of pride. I’d boast to my classmates and friends about how my Dad worked on airplanes, although I never knew specifically what he did until much later in my life. To us kids, he was practically an astronaut.

Of course, soon came the teenage years that both parties equally dread. Although I was the perfect child, in my humble opinion, there was never a shortage of arguments and disagreements. But, as it so often does, the Moment I moved away to attend college, those arguments stopped (for the most part).

Then, our relationship had transformed into one of mutual admiration and respect. It also brought clarity to me and my sisters as to who was the favorite one. Spoiler alert: me. I’m mostly kidding, but what was once a father-daughter relationship, quickly became one of friendship. Perhaps, some of that was due to my no longer having to follow his rules. But a big part of it had to do with my world expanding, starting with my attendance at UCSB. If anyone knew a thing about my Dad, it was his love for the ocean. 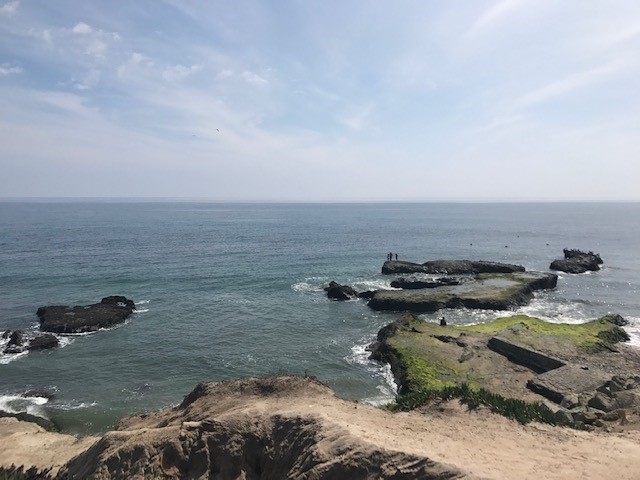 When I was much younger, we’d spend weekends in Dana Point watching the boats. My entire family would come, but it was the two of us who would grab a snack and talk about not only the boats, but the unknown sea creatures that I was fascinated with. So, as corny as it sounds, the sea the two of us shared throughout my four years at UCSB brought us closer. The only way I could get him to hike was by walking the path around the campus lagoon—which led to the ocean—and its surroundings. During these walks, our conversations about the sea would come up again, and we’d point out every boat we could find. Yes, it was part of the Pacific Ocean that we’d both experienced my whole life. But this felt different—it was a special piece of it for us at a school that felt like home.

As I made my way through college, Dad and I would share silly emails and text messages. He and my Mom would come visit me, and he’d do all our dishes. Dad even once cleaned our stove! He also became my biggest cheerleader and never missed an opportunity to brag about something I was doing. This was most likely at the expense of other people’s sanity. including my sisters (sorry, Jill and Jen), but that never stopped him. It could have been an A on a paper, a promotion at work, an internship, a newspaper article I wrote, or even safely navigating through a roundabout on my bike. Yes, a roundabout!  I didn’t learn until I was 18. At the time, Dad watched my then seven-year-old nephew laugh at me, as I desperately tried to learn the skills of roundabout navigation before moving to a bike town. It was all in good fun, but it didn’t mean he was any less proud of me. Even a tiny or seemingly insignificant success for me meant a celebration for him.

Sadly, it all came to a screeching halt in September 2019, when he very unexpectedly passed away. I immediately jumped into protector and solver mode, but my relationship with him was no longer. It had fallen apart at my feet, and I wasn’t sure how to put it back together. I could help my Mom and family. I could be there for them and go through the motions, but that didn’t take away from the fact that a relationship I had depended on was cut off.

Sure, I experienced what many do when they lose a loved one in terms of connection with the deceased. Sometimes, in the midst of crying, my Xbox would suddenly start turning off and on all by itself, and Dad  would appear in my dreams. I am convinced these were direct efforts by him to reach out to me to console and communicate with me, but it still felt like our father-daughter relationship was cut with dull scissors, leaving the ends frayed. Sometimes, those ends felt like they were electrically charged, sharp wires with the amount of shock, pain, and loss I often felt.

Grieving is difficult for everyone in so many ways, but it became even more difficult during the pandemic. Six months into losing him, I had to resort to Zoom or Google hangouts to talk to my family and friends. Not only that, but I lost the outside world and all its connections to him. For example, I couldn’t go out for beers in Solvang, which was a favorite of his (beer, not Solvang necessarily), nor could I rent a boat. I had lost all grounding, and the things that would have normally helped me keep my footing were gone.

However, I learned something at the end of 2020 that not only helped make the year just a tad more bearable, but it proved to me that relationships with our loved ones don’t end. They transform.

One night in December, after a particularly rough month for me, I had what I called a dream. I was in my parents’ home and confused as to why my Mom was acting like Dad was just on his way home from work. Even in dreamland, he wasn’t alive anymore. I even voiced that in the dream, and my Mom brushed me off. She told me he was on his way home from the hospital—how absurd! How could he drive himself home in the condition he was in, and there was no way they’d allow him to do so. But sure enough, there came his footsteps up the stairs to our front door. Dad came in and smiled at me. Still confused, I went to hug him and feel if he was real. I wanted to know if he felt different or still seemed sick. Much to my surprise, he felt and looked normal. We squeezed each other so tight, and he was still smiling—Dad was happy to see me.

I then woke up, and the feeling of calm that washed over me was more than enough. My Dad was okay, and he was letting me know. Dad was visiting me and I wasn’t dreaming, as my friend and colleague, Galen Goben, shared with me when I brought the experience up to him. My grief had transformed into one of feeling gratitude and relief—all the tension that I’d been feeling and collecting within me was released.

Most importantly, I realized, that while I did not have the same relationship, I used to with my Dad, I had a transformed relationship. Now, we communicate through dreams, Dad jokes that come to my mind in Moments he would have cracked one, memories, and the ocean. He continues to visit me, and our many memories can never be erased. His death does not take away from those memories and experiences, but it is what our relationship is now centered on. While I would love nothing more than for him to still be with me physically, I’m grateful for what we do have together and the spiritual connection and communication we share.

And the sea will always be there for us.