The American flag means different things to different people. For most, it is a symbol of pride of the country we call home and all the freedoms we enjoy. For millions of immigrants over the years, it has been a sign of hope and new beginnings.  Millions of men and women have served in the armed forces under the flag and defending what it stands for. 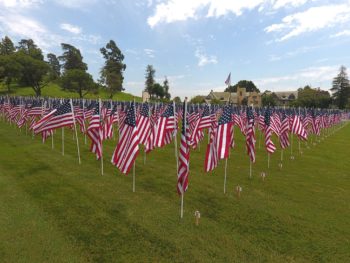 For one former major leaguer -turned broadcaster, the flag has special place in his heart, and in history.

Back on April 25, 1976, the Dodgers and Cubs were playing an early season game on a pleasant Sunday afternoon. It would have been just one of 162 games had it not been for what happened in the fourth inning.

With Ted Sizemore at bat in the fourth inning, two people ran onto the field while the game was going on. One of them was carrying a flag.  He unfurled it in the left-center outfield like he was putting a blanket on the beach.  The other poured lighter fluid on it and struck a match.

Over the airways, Dodger broadcast legend Vin Scully screamed, «It looks like he’s going to burn a flag!»

Enter current Dodger broadcaster Rick Monday. Long before his days in the broadcast booth, he used to patrol center field for the Blue. A former Marine Corps Reserve, Monday didn’t waste a second of time. He sprinted towards the pair, grabbed the flag and kept running.  The flag was soaked with fluid but was not ignited. Monday handed the flag to pitcher Doug Rau, while Dodger skipper Tommy Lasorda ran over and screamed a few phrases we can’t repeat here.

The would be flag arsonists were quickly apprehended and the crowd of 25,167 gave Monday a rousing standing ovation. The scoreboard proudly proclaimed: «Rick Monday—You Made a Great Play!»

Reflecting on it years later, Monday still has strong feelings about it. In an interview with VICE Sports he said, «What they were doing was wrong, and I wanted them off the field. I did not want them to be able to desecrate an American flag that some of my buddies lost their lives for, representing the rights and freedoms that you and I enjoy.»

As we approach Flag Day, we have to echo the scoreboard’s sentiment, even 43 years later: Rick Monday, you sure did make a great play!