One of the first of Forest Lawn’s historical and inspirational pieces of mosaic art that was put on display was the «Signing of the Declaration of Independence,» a replica of a painting by American artist John Trumbull. It is located in the Court of Freedom in Glendale, flanked by bronze statues «The Republic,» by Daniel Chester French, and «George Washington,» by John Quincy Adams Ward.

Trumbull’s original work is a 12 by 18 foot oil painting that was commissioned in 1817 and placed in the United States Capitol rotunda in Washington, DC in 1826.

Forest Lawn’s mosaic, measuring 20 feet by 30 feet, is three times larger than the original and is composed of over 700,000 pieces of Venetian glass tile in more than 1,500 shades of color. 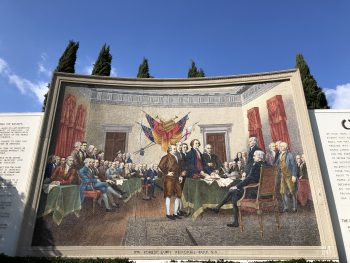 The painting is revered for its almost photographic likenesses of the best known signers. This is due to the fact that Trumbull painted the heads of the originals from life. Trumbull took some creative liberties in his work, such as assembling the most prominent men in the foreground, including some delegates who were not there that day, and omitting others.

Why did he leave some signers out? Fourteen to be exact?

His original intention was to include each of the 56 signers, but he was not able to obtain likenesses for all of them.

Despite the omission, all 56 signers have gone down in history as brave and courageous men who, in their own words supported the Declaration «with a firm reliance on the protection of divine Providence, (as) we mutually pledge to each other our Lives, our Fortunes and our sacred Honor.»