Although his baseball career spanned more than five decades and covered a number of teams and cities, he is primarily associated with clubs in New York City. Between playing and managing, he is the only person to have won all four of New York’s major league clubs’ uniforms — the Yankees, Mets, Giants, and Dodgers.

Beginning his professional career in 1910, he enjoyed a long, but average career. In his self-deprecating way, he was quoted as saying, “I had many years that I was not so successful as a ballplayer, as it is a game of skill.”

After his playing days were over, he became a baseball manager, leading the Brooklyn Dodgers and Boston Braves to the same level of mediocrity as his playing days. He was soon out of the major leagues but continued to manage in the minors, where he led the Oakland Oaks to the Pacific Coast League championship in 1948. That caught the attention of the New York Yankees who were in the market for a new skipper. Upon taking over, he realized that at long last he had a chance to succeed at the Big League level. “There is less wrong with this team than any team I have ever managed,” he quipped.

Boy was he right! Between 1949 and 1953, his team rattled off five consecutive World Series championships, the only manager ever to accomplish that feat. He retired from coaching in 1959. 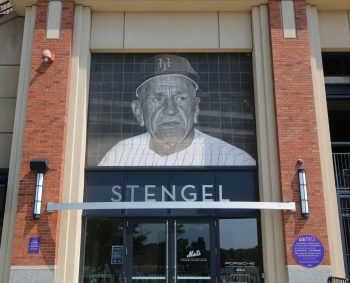 But just one season later, he was recruited out of retirement to manage a new expansion team, the New York Mets. Going in, he knew there wasn’t much of a chance that the Mets would win many games. He was right once again. Their inaugural year mustered a 40–120 win-loss record, the most losses of any 20th century MLB team. The Mets finished last all four years he managed them but was boosted by considerable support from fans.

“Come see my “Amazin’ Mets,” he often said.”I’ve been in this game a hundred years, but I see new ways to lose I never knew existed before.” Describing his three catchers: “I got one that can throw but can’t catch, one that can catch but can’t throw, and one who can hit but can’t do either.”

One of the greatest characters in the game, he was Charles Dillon “Casey” Stengel. Elected to the Baseball Hall of Fame in 1966, he passed away on September 29, 1975 and was laid to rest at Forest Lawn-Glendale as a Distinguished Resident.