There has long been a fascination with a period of American history known as  the “Wild West.”  It has been the subject of countless movies, songs, works of art, and festivals. Perhaps no single person has embodied the persona of the American West than one man who was born on September 29, 1907 in north Texas. 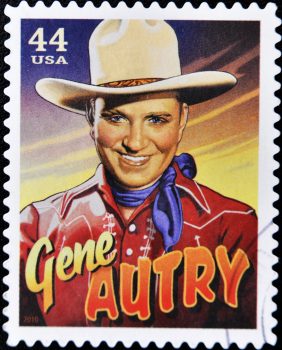 While still a young boy, his family moved to Oklahoma where he worked on the family ranch. After finishing high school, he found a job as a telegraph operator in Chelsea, Oklahoma, and in the wee hours, would sing and play guitar—an act that eventually got him fired.  One customer–the famous humorist Will Rogers— heard him sing and encouraged him to pursue a professional music career.

After auditioning for a few record labels and being rejected, he finally signed a deal with Columbia Records in 1929. By the time his singing career was over, he had become known as the “Singing Cowboy,” with 640 recordings, including more than 300 songs he wrote or co-wrote to his credit. His sales topped 100 million copies, with over a dozen gold and platinum records, including the first record ever certified gold record.

After serving in the military during World War II, he built upon his recording success and ventured into a career in radio, television and the movies, appearing in 93 films, and hosting his own TV series. He also enjoyed a successful post entertainment career in business, where he owned a television station and several radio stations in Southern California. He even owned the the Los Angeles/California/Anaheim Angels Major League Baseball team from 1961 to 1997.