Born in New York on May 15, 1856, he was educated by tutors at his home during his early years. When he turned 12, he attended the Peekskill Military Academy but had to leave due to health reasons. Although he never finished his high school degree, he spent his early adult years dabbling in acting and stage writing.

Stage writing led to employment as a newspaper reporter and a businessman. In his 40’s he discovered that he had a talent for telling tales to his kids so he began writing children’s stories.  His first collection was published in1897 under the title of Mother Goose in Prose, which he followed up with the top selling children’s book of 1899, Father Goose, His Book.

But it was in 1900 that he struck gold when he introduced his readers to a fantasy land that would capture the imagination of millions.   His book was turned into a successful Broadway musical and in 1939, 20 years after his passing, a film version of his classic tale was portrayed on the silver screen.

His name was L. Frank Baum. His tales of munchkins, witches, a cowardly lion, straw man, tin man, and a girl named Dorothy from Kansas was told in his classic The Wonderful Wizard of Oz. The Wizard of Oz movie, starring Judy Garland, Ray Bolger,  Jack Haley,  Bert Lahr and Frank Morgan, went on to become one of the most watched movies in the history of cinema.

L, Frank Baum passed away on March 5, 1950 and is interred at Forest Lawn-Glendale. 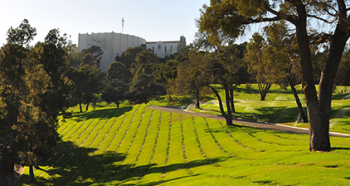