245 years ago this month, Paul Revere embarked on an important mission for the  Massachusetts colonialists, immortalized by Henry Wadsworth Longfellow in his 1860 poem, “Paul Revere’s Ride,” and almost a century later, as a featured scene in Forest Lawn’s “Birth of Liberty” mosaic. 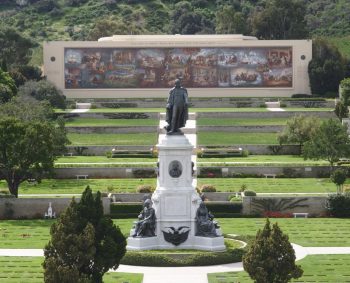 Wadsworth did employ some poetic license in his work. For instance, he didn’t mention that there were two other riders who took different routes to Boston to warn John Hancock and Samuel Adams that the British were marching. Those riders were William Dawes and Samuel Prescott, and it was actually Prescott who was able to reach them with the news.

Another similar ride, though not as famous, is claimed to have taken place two years after Revere’s.

According to the story, on April 26, 1777, American Colonel Henry Ludington received news by a rider that the nearby town of Danbury, Connecticut was under attack by British troops and needed help. With his troops temporarily disbanded so they could prepare their farms for the growing season, and the rider too tired to carry on, there was no one available to carry the warning message.

No one except his 16 year old daughter Sybil.  The young lady rose to the occasion, and went by horseback through the dark woods and in the rain, covering between 20 and 40 miles, according to estimates. When she returned, hundreds of soldiers were able to gather and prepare to fight the British.

While she may not have as famous a name as Paul Revere, Sybil Ludington’s courage and loyalty to country were second to none in her time.