It’s hard to believe for those of us who have reached middle age, but the legendary Summer of Love—1967— was 51 years ago. Where does the time go?

More than 100,000 people of the counter-culture—-hippies as they were called—converged on San Francisco’s Haight-Ashbury seeking an alternative to the mainstream through free love and mind-altering substances.

The summer of 1967 served as both the peak and the unraveling of a counterculture that was rooted in the civil rights movement, as well as a creative music and theater scene.

Closer to home, Forest Lawn had only four locations—Glendale, Hollywood Hills, Cypress, and Covina Hills to serving the greater Los Angeles area. While the beautiful and peaceful grounds of our memorial parks brought solace and comfort to many, the world around was anything but comforting.

While 1967 may have been the Summer of Love, the following year wasn’t particularly full of loveliness In fact, 1968 might have been one of the most tumultuous in our nation’s history.

In 1968, the Vietnam War was going full throttle. It was an election year and the Democratic National Convention was in the spotlight for its rough interaction of police and anti-war protesters who were chanting, “the whole world’s watching!” on live television. Two revered figures, Dr. Martin Luther King, Jr. and Robert Kennedy were assassinated—one in Memphis, and the other right here in Los Angeles. 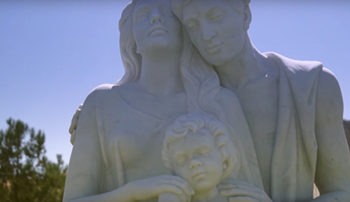 Perhaps it was fitting that one of the year’s biggest albums, “Beggars Banquet” by the Rolling Stones featured lyrics such as:  “I rode a tank, held a general’s rank while the blitzkrieg raged and the bodies stank.”  Certainly the Summer of Love was gone.

So, here we are, 50 years later. Wars rage on. The world sits on edge with the threats of terrorism and other issues that threaten our safety and comfort.  Hippies became Baby Boomers and are beginning to retire r from the workforce. They’re being replaced by Millennials who are challenging the social norms of society.

It seems that the old adage really is true: the more things change, the more they stay the same. That’s true here at Forest Lawn. While we have grown and expanded, we are as committed now as we’ve ever been to serving our client families.  And that will never change.