At Forest Lawn in Glendale, there is a bronze statue facing westward across the Garden of Freedom. It is bronze figure of a World War I infantryman standing above the simple words, “Dedicated to our honored heroes of land, sea and air.”

Earnest and ready, rifle in hand, he is the symbol of all of America’s sons and daughters who have faced enemies in all wars. Leaving behind everything for the cause of freedom, this bronze is a tribute to their devotion, courage and sacrifice.

Among them was my grandfather,  Papa Luigi.

Sixteen year old Luigi Finotti came to America April 1913. Like so many others before and after him, he had big dreams of a new life in America, and left everything he had to build a new life.  But just five years after his arrival, his new country found itself in the throes of the largest conflict the world had ever seen—World War I.  It was called the war to end all wars, as it was the first truly global conflict and brought with it all the destructive advances born in the Industrial Age.

I think it’s safe to say neither Papa Luigi nor the thousands of his other fellow newcomers had fighting in a war in their plans when they came to America.  Yet during the height of the fiercest and most deadly combat, Papa Luigi volunteered for the Army. He served throughout the duration of the conflict, and was honorably discharged exactly a year after the war ended.

I never got to thank Papa Luigi for his service. In fact, I never met him. He died many years before I was born. To this day, I make it a point to thank every veteran I run into for what they’ve done on my behalf.

This Veterans Day marks the 100th anniversary of the end of World War I. Let us all pause, remember and thank those who have served our great nation in the past and continue to do so to this day.

Our veterans certainly deserve it. 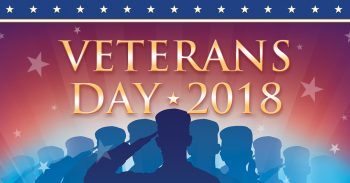