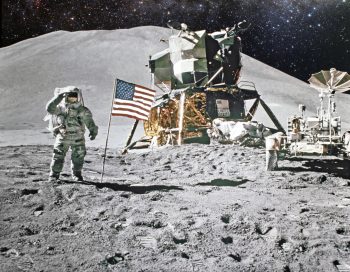 It was July 20, 1969, fifty years ago when hundreds of millions of people watched Neil Armstrong, a humble man from Ohio, step out of his space capsule onto the moon’s surface.  His words of that experience are among the most famous ever uttered: “That’s one small step for man, one giant leap for mankind.”

Inside the capsule, Buzz Aldrin, who would soon join Armstrong on the lunar surface, played a recording of Frank Sinatra’s “Fly Me to the Moon.” It was a moment for the ages.

What began as a challenge by President John F. Kennedy in 1961–to put a man on the moon by the end of the decade—came to fruition as a proud nation looked on.  This, the 11th of the 17 Apollo missions, not only fulfilled Kennedy’s challenge, but also provided a bonanza of consumer and technological benefits we enjoy to this day.  Velcro, water filters, freeze dried food, scratch resistant coating on eyeglasses, shoe insoles, and the development of micro electronics and computer systems are all products of the Apollo program.

Armstrong passed away in 2012 at age 82 from complications resulting from cardiovascular procedures. Flags across America were flown at half-staff by order of then President Barack Obama.

During his life, as famous and acclaimed as he was, Armstrong remained an intensely private individual. As the nation paid him tribute, his family honored his example of service, accomplishment and modesty with a private, invitation only funeral.