According to statistics provided by the National Funeral Directors Association, the choice of cremation has been increasing for decades in the United States, from fewer than four percent of memorial services in 1960 to approximately 41 percent in 2010. By  2035, it is estimated that cremations will be selected in 78 percent of all services.

This means there is and will be a need for more memorial property with cremations in mind. Traditionally, this has meant wall niches or regular ground property. But once again, Forest Lawn has led the way in memorial innovation with its Woodlands development at Hollywood Hills—and soon to be featured at Covina Hills and Cypress.

Originally opening at Hollywood Hills in October 2004, The Woodlands was Forest Lawn’s first cremation garden, offering families who chose cremation a unique memorial option within the beautiful, natural confines of a California landscape. 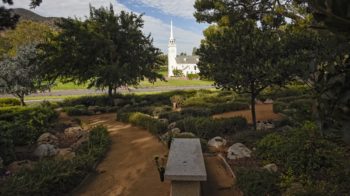 A walk through The Woodlands is like walking in the woods. It’s organic, rhythmic and natural, with paths made of decomposed granite and garden walls that are never more than three or four feet high.

Future plans include developing the next phase at Hollywood Hills, which will double its current size.  The centerpiece will be a stream with two waterfalls cascading down from the banks of Sennett Creek, intertwined among cremation property.

At Covina Hills, plans are underway for Woodlands property on the backside of the Mausoleum of Christian Heritage that will include stained glass windows as vertical elements. In between those elements will be selected quotations about nature, family and memories. Niche elevations installed along the building will feature decorative pergola screens to give shade from the sun. The decorative vining leaf pattern in the screens will create a visual rhythm and ambiance. The property itself will consist of cremation rocks, distinguished memorial rocks, cremation tree stumps, traditional wall niches and distinguished memorial cremation

Want to learn more about The Woodlands or any of Forest Lawn’s other memorial property offerings? Give us a call at 888-204-3131 and we’ll answer your questions.