Throughout his illustrious life, Founding Father Benjamin Franklin made several trips to Paris, but perhaps none was as significant as his visit in September of 1783.  Accompanied by fellow revolutionaries John 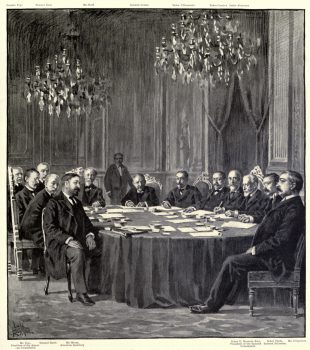 Adams and John Jay, Franklin was part of the American delegation to sign the Treaty of Paris which formally ended the Revolutionary War between the United States and Britain.

The treaty declared the intention of both parties to “forget all past misunderstandings and differences” and “secure to both perpetual peace and harmony.” It not only officially ended the conflict, but began a long, thriving friendship between the two nations that endures to this day.

The story of America’s struggle for independence is told in colorful glowing mosaic at Forest Lawn-Hollywood Hills. Containing 25 scenes and events in our nation’s history from 1619 to 1787, the “Birth of Liberty” mosaic is a composite masterpiece measuring 162′ wide by 28′ tall, and contains of millions of pieces of glowing Venetian tile.

Beginning with the Mayflower at Sea and ending with the First Prayer in Congress, the “Birth of Liberty” is a visual lesson in early American history. Each scene is a reproduction of a famous American painting or statue recreated for the enjoyment and education of all who view it.

If you haven’t seen this amazing work, or haven’t visited it in a while, why not make plans soon to see a true masterpiece!