In the Church of Our Lady in Copenhagen, Denmark, stands an impressive statuary work by renowned sculptor Bertel Thorvaldson called the “Christus.” Since its unveiling at Forest Lawn-Glendale in 1947, millions of visitors have admired its inspirational beauty. 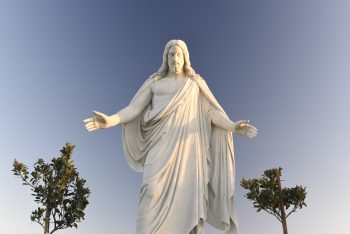 However, no one would have been able to appreciate its majesty if it weren’t for the brave actions of several people decades ago.

Back in 1939, Forest Lawn commissioned artists in Italy to create an exact reproduction of the “Christus.”  In September of that year, Nazi Germany invaded Poland launching the start of World War II. By May 1940, word was received that the finished sculpture was ready for ship. Forest Lawn wired congratulations but received no answer. The curtain of war had silenced communications.

During the next four years, at great risk to themselves, Forest Lawn’s friends in Italy repeatedly saved the crated statue from confiscation and damage. Once while it stood on the dock ready to be shipped, the brave ship workers outwitted Gestapo men hunting treasures for Hermann Goring by temporarily marking it for shipment to Goring in Sicily. Three times they moved the huge crate when shellfire threatened it.

At last on July 18 1946, the “Christus” was shipped from Italy. It was unveiled on December 7, 1947 in the beautiful Court of the Christus in Glendale. Other exact replicas were crafted and are on display at Hollywood Hills, Cypress and Covina Hills.