Almost two decades before the Civil Rights movement of the 1960s, a young basketball coach at Indiana State Teacher’s College was faced with a dilemma regarding one of his players, a desire to win, and the moral responsibility to do what he believed was right. 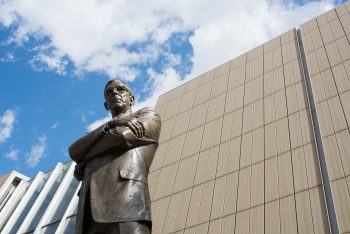 Indiana State won a spot to play in the National Association of Intercollegiate Basketball (NAIB) post-season tournament. At the time, the NAIB did not allow black players to participate in the tournament, and Indiana State had a young black player by the name of Clarence Walker. The coach was told that Walker was not welcome.

The coach, setting aside an opportunity to make a name for himself in the tournament, decided to take a stand against segregation in college basketball. Indiana State did not participate. After his decision, several other schools declined as well. Eventually, the NAIB decided to allow integrated teams to play.

A year later, Indiana State won its conference and headed for the NAIB tournament again. When Walker went into the game during the first round of the tournament on March 9, 1948, it was the first time a black player competed in the tournament.

The coach soon left Indiana State for a new coaching opportunity for a west coast university that was building its basketball program. While attending a convention for coaches in Louisville, Kentucky in 1962, he was confronted with more segregation issues.  Black coaches were not allowed to stay or eat at the hotel.

“If they couldn’t eat there then neither will I,” said the coach. He skipped the banquet and ate at a restaurant that served African Americans.

By the time his coaching career ended, John Wooden, aka the “Wizard of Westwood” amassed ten NCAA national championships over 12 years at UCLA, including an incredible seven in a row. He was named national coach of the year seven times and AP’s coach of the year five times.

But for all his success on the court, his greatest achievements may have been his steadfast commitment to standing up for what was right.  Coach John Wooden passed away on June 4, 2010, just 4 days shy of his 100th birthday.  His legacy of faith, family, and justice are remembered by his family, friends, former athletes, and fans alike. Coach Wooden is a Distinguished Resident at Forest Lawn Hollywood Hills.