“Where the leather is scarred, there is a great story to tell.”- Jimmy Tart

Americans have had a long-standing fascination with the Wild West.  For years, traveling shows such as “Buffalo Bill’s Wild West” entertained crowds with stories and songs about the days on the frontier. Western movies dating back to the golden age of film drew millions of viewers. The idea of taking risks, open spaces, and the romanticism of the cowboy life still capture our imaginations today. One only needs to look at two of the most popular shows on television—“Yellowstone” and “1883”— to see that this love affair with the west has not gone away.

But before all the movies and TV shows was the great American western novel. One of the writing pioneers of westerns was an American author who got his start writing poetry and short stories in the 1930s and 40s. Although primarily a writer of what he called “frontier stories,” he also had success with historical and science fiction. But it was his westerns that brought him to prominence.

He eventually wrote 100 novels, over 250 short stories, and sold more than 320 million copies of his work. “Hondo,” “The Quick and the Dead,” “Silver Canyon,” and “Conagher,” are just a few of his works, most of them translated into 10 languages and still in print. Box office stars John Wayne, Tom Selleck, and Sam Elliot have been featured in films based on his novels. 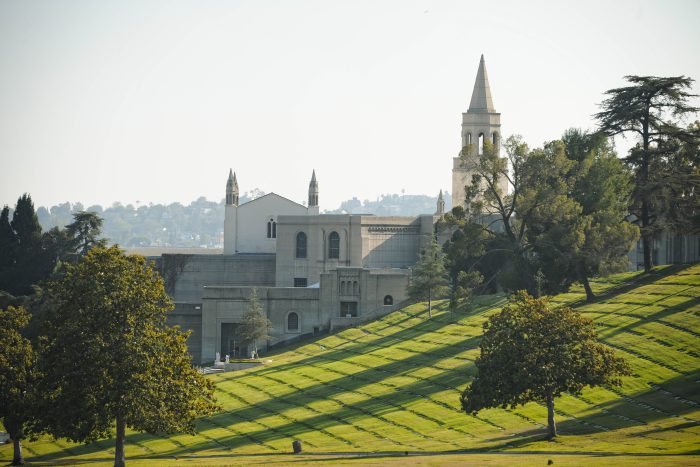 The writer was Louis L’Amour. He earned many awards during his lifetime, including the Presidential Medal of Freedom, presented to him in 1984 by President Ronald Reagan, and was the first novelist to receive the Congressional Gold Medal. L’Amour passed away in 1988 and was laid to rest on the western side of the walkway leading to the Great Mausoleum at Forest Lawn-Glendale as a Distinguished Resident.